Regular function of NMC was started only after approval of "NMC-Rules" which was approved by His Majesty's Government on 17th Poush, 2024(1st Jan 1968). Initially executive members of NMC were consisting of only nine and Director of Health Services was the ex-officio Chairman of the Council. The first amendment of NMC Act came into force on 9th Ashwin, 2044(25th Sept 1987) in which the number of executive members of NMC was increased from nine to seventeen. Likewise second and third amendment of NMC Act came into effect on 27th Ashad, 2047(13th October, 1997) and 2nd Baisakh, 2056(15th April, 1998) respectively. Third amendment again increased the number of executive number of NMC from seventeen to twenty five. Immediately after two years of third amendment i.e. on 6th Bhadra, 2058(22nd August, 2001), fourth amendment of NMC Act was made on the name of "Health Related Some Nepal Act Amendment Act- 2058" in which again total number of executive members reduced from twenty five to nineteen, which remains the same till date.

The major functions of Nepal Medical Council, as per NMC Act are: 1) Quality control of Medical Education of the country 2) Quality control of Health Services of the Country 3) Establish Ethical Health Care Practice 4) Establish Standardization of Medical Practice 5) Disciplinary action for breaching the Ethical/Standard Health Care Practice There is provision of one Registrar who is nominated by Govt. of Nepal, for the execution of decision of Nepal Medical Council as well as implementation of all activities laid down by the Act/Rules/Regulations of NMC. So far till 31st December, 2017 altogether 21,413 doctors are registerd in NMC; among them 19069 are Medical doctors, 2344 are Dental doctos and 6079 are Specialist/Sub-specialist doctors. Composition of Nepal Medical Council: Presently Nepal Medical Council is composed of nineteen members who are representing from:

CHAIRMAN : One person nominated by Government of Nepal, from amongst doctors having a min. 20 yrs. Experience as registered doctors with master degree in medical science.

* One person nominated by Government of Nepal, from amongst the Dean or rectors of the medical colleges or health science academy.

* One person nominated by Government of Nepal, from amongst consumer.

REGISTRAR : One person nominated by Government of Nepal for the post of registrar. 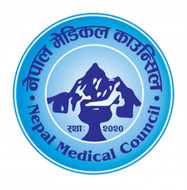 There are many medical and dental institutions in Nepal registered under Nepal Medical Council.Here...

Registration can be of different types as follows.

You can download various forms provided by Nepal Medical Council

ACCREDITATION STANDARDS FOR THE BDS-2017

Accreditation Standards for the MBBS program -2017

Code of Ethics And Professional Conducts 2017